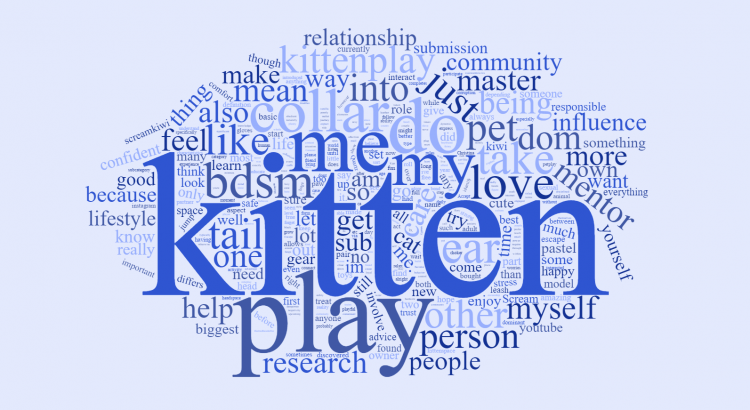 “What is kitten play” answered by active kittens

A pet and Master, pet being a submissive person whilst a Master is the dominant person. Both take care of each other emotionally and physically.

It’s a way a person feels and identifies with. This person enjoys acting as an animal to an extent and it sometimes help them to relieve stress and it makes them feel good.

a person who behaves like a cat/kitten because it’s what they enjoy :3

the sub being and acting like the Dom’s pet

The act of a sub committing kitten like behaviours, usually with a Master Dom who takes care of them and treats them as a pet.

Finally being able to be myself and having an amazing Dom that accepts and nurtures that side of me. Escape from daily reality where I can just lounge and be cared for.

A mind space where one acts like any time of cat that they prefer or connect most with. It let’s one escape from reality and live the life of a cat. There are no set rules to kitten play. As long as there is some sort of head space of a cat, it is kitten play.

Letting out your inner kitten. Being yourself. Being playful and without responsibility… freely being who you are or most wish to be with who you love.being taken care of. Loved and cherished.

Entering a headspace that allows you to take on a kitten/cat aspect and letting go of your responsibilities and issues as an adult.

A person who likes to be like a kitten. Kitten play can be two people taking the parts of master/mistress and kitten and interacting. It often has sexual aspects.

A form of pet play, where the emphasis is on power imbalance between the sub (pet) and dom. Kitten play is one of the cuter variations of pet play, involving soft and hardcore elements.


In its most basic form, kitten play is a form of role-play in which one or more participants take on the role of a real or imaginary species of feline. This can be as little or as much as the participants desire, and can include the mannerisms, behavior, and look of said animal. If one or more of the participants does not take the role of an animal, they can choose to take part by playing the role of trainer, Owner, etc. Participants can experience an altered state of mind, usually referred to as sub- or pet- space, letting go of human worries and returning to baser instincts, allowing for full immersion in the present.

A selection of kitten play Definitions:

In kitten play, a person dresses to resemble and assumes the mannerisms and character of a kitten or cat, a characteristic of which is that it keeps some independence and, as part of the fantasy, might retaliate against the partner trying to tame/train him or her. Some might be trained to do tricks such as bring toys back, to beg, or go on walks. Like in puppy play, a kitten or cat that is unowned or uncollared may be called a “stray.” (Source: https://de.wikipedia.org/wiki/Petplay)

TLDR: So what is kitten play?